The Stray Birds brought quite a crowd to last night’s house concert.  The event was sold out several weeks before the show and although I did not know many of the people planning to attend, connections were quickly made as people arrived and were introduced.  We met more of our city neighbors , an organic farmer at Blue Rock Farm, a baker who made the loaf of challah we purchased at A Loaf of Bread just hours earlier, individuals who had been in our house long before we lived here, people with Portland connections and even a potential fiddle teacher for Tim.

I collect musicians made from a variety of materials, but a favorite is an orange & blue guitar-playing gecko made from recycled aluminum.  He’s colorful and bright and had prime seating beside The Stray Birds’ stage.  Before the show began, Melissa who works with the artists that sell their products through Ten Thousand Villages and her friend Shannon asked if they could take my photo with the gecko.  Melissa explained, ‘I know Victor, the artist who made this – and I want to send him a photo’.

Victor Chiteura of South Africa creates a piece of art & it’s shipped to a Ten Thousand Villages store in Portland, Oregon.  Tim buys the gecko and sends it to me in Lancaster, joining me & said gecko a few months later   A friend of Victor’s attends a Chestnut House Concert and sends a photo of me & the gecko plus a CD of The Stray Birds back to South Africa to Victor.

I love how music connects the world. 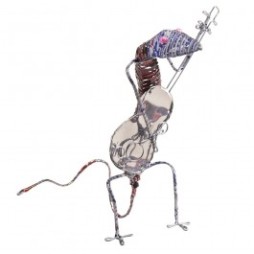 1 thought on “An Unexpected Connection”