Most people are familiar with the name Bombadil from Tom Bombadil, one of J.R.R. Tolkien’s characters in The Lord of the Rings.  But the Montreal-based band The Bom 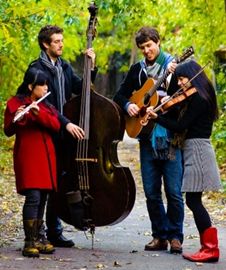 badils report that using this name was mostly influenced  by a song called “In the House of Tom Bombadil” by Chris Thile of Nickel Creek. The song is playful and melodic, mimicking the cadence of character Tom Bombadil who nearly always spoke or sang in an old English meter of 7-beat lines broken into groups of 4 and 3.  Thile used septuple meter – seven notes of equal duration in a measure, making the time
signature in the song vary between 7/8 and 4/4.

Not into music theory?  No worries.  All you need to do is attend the house concert on
Saturday, May 17, 2014 and relax and listen to The Bombadils as they play a mixture of covers and originals;  Celtic and bluegrass with guitar, mandolin, flute, upright base, harmonica, Irish whistle and violin.