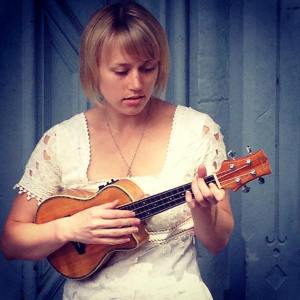 Dirty Dollhouse will make a special appearance at the Jake Lewis & the Clergy house concert on Sunday, July 6, 2014.  Not knowing much about the three female musicians in Dirty Dollhouse I reached out to the lead, Chelsea Mitchell.  She kindly (and promptly) responded to my interview questions.  I’ll share them so that you too can get to know them a bit more before their appearance here at Chestnut House Concerts.

How old were you when you first discovered that you could sing well – and who encouraged you?

I was pretty unaware I could sing until I was 14 or so, and even then it was only because someone else told me I could. I sang in my church’s choir and the director happened to be a seasoned opera star who took me under her wing. I ended up studying opera privately for about 4 years and then in college for another 4 years. There is no stronger vocal foundation you can have than classical training, so in that respect, I got extremely lucky.

What was one of your most enjoyable performances – and what made it fun?

One of my favorite performances ever was the Married in the Aviary EP release party at World Cafe Live. That EP was a total labor of love and all the musicians involved were top-notch people and amazing players. I got to share the bill that night with August John Lutz II of Levee Drivers, an incredible performer with an incredible band, and The Lawsuits, who have been on a skyward trajectory since the day I met them. The evening was magical. Plus, World Cafe holds a special place in my heart as it was my first introduction to the Philly music scene back in 2005. I spent every Monday at their open mic with the incomparable Bruce Torres.

How/when did you meet Amber & Vanessa and what brought about the formation of Dirty Dollhouse?

I met them both around the same time in early 2012 through August Lutz. I had seen Amber sing with Levee Drivers and Vanessa with The Lawsuits…their talents were simply undeniable. And since I’ve always been a choir girl and a huge fan of harmony, I wrote a somewhat traditional song called “Nobody’s Daughter” in three parts: Amber took the low, Vanessa took the high, and I sang the melody in the middle. Their voices blended with such ease, it was almost too good to be true. So I wrote some more songs for them and Dirty Dollhouse was born. Considering how busy they have become in the last two years, I’m glad I snatched them up for my project while they were still relatively available!

Lancaster is an incubator of creativity in all the arts areas including music and food. Will this be your first visit and or performance here?

This will technically be my second performance here, but my first as Dirty Dollhouse. I sang a few songs with Levee Drivers at The Fridge recently – love that place! I haven’t actually explored Lancaster, though, so I’m excited to walk around and see what’s happening. I’ve heard nothing but good things.

Chestnut House Concerts hosted Adrien Reju and Brad Hinton in the fall of 2013. We noticed Brad will be on your upcoming album. Will he be doing any yodeling? 🙂

Haha, I don’t think he’ll be yodeling on this particular album. But damn, is he ever talented. I host Record Store Day at the Newtown Book & Record Exchange every year and Brad has been a staple at the event. Everyone loves him.

Where do get your inspiration for your songs? Have you ever co-written; if so, how does that work?

My inspiration mostly comes from my own life and mainly from conversations I’ve had – and I’m a big talker, so I have an essentially limitless supply of inspiration at my fingertips. I’ve never co-written any songs, but I’ve definitely done a lot of collaborating with Brian Strouse of The Lawsuits for the upcoming Dirty Dollhouse EP. I’m somewhat stubborn and need to have control (a lovely combination), but Brian and I agree on so many things, musically speaking. I love his ideas and it’s just really easy to work with him.

How did you & Jake Lewis meet? Have you shared a stage before?

I met Jake Lewis through his bandmate Katie Seifarth at what used to be Milkboy Coffee in Ardmore…sometime in 2013, I think. We were both participating in “The 9,” a traveling singer-songwriter series. The harmonies of Jake Lewis & The Clergy are so perfect and their music is enchanting. I try to get on as many bills with them as possible just so I can watch.

You have your own albums – has Dirty Dollhouse released any?

Not yet! Nothing official, at least. It’s coming. But for now, we have a Christmas single called “Party Dress” that I did last year with Brian Strouse and a live EP we did a few months ago at East Coast Recording Company. You can listen to both on our SoundCloud!

You discover that you have a free day in your beautiful city of Philadelphia. What would you do?

I would get a Thai iced coffee from Rocket Cat, hope for sunshine, and walk around Fishtown and Northern Liberties, my two favorite neighborhoods. I would probably end the day at North Bowl, because where there’s bowling and booze and tater tots, I’ll be there.

Chestnut House Concerts provides dinner for their performers. What can we make you for dinner?

I don’t eat a lot of meat, but other than that, anything! I’m sure it will be delicious. I would never turn away a big plate of mac ‘n’ cheese, though…especially the kind you bake in the oven with something crumbly on top.