PJ was not with Lindsay Lou & the Flatbellys in 2013 when they played at Chestnut House Concerts, and although we met very briefly at Greyfox Bluegrass Festival last year, the introduction was not long enough to get to know much about this artist.  PJ graciously responded to a few interview questions so that Chestnut House Concerts could introduce him prior to the house show coming up on Sunday, September 7, 2014.

How old were you when you first started your own music collection and who were some of your favorite artists?

I remember pretty much always having a music collection, probably from when I was 5 or 6 on. First on cassette tape then when CDs came out, I got a CD player and started acquiring. Some early things I remember being in the collection were the Beatles Past Masters collection, Michael Jackson, Tom Petty’s full moon fever. I also remember listening to some of my mom’s vinyl collection which included some 50’s doo wop collections and Waylon Jennings and Willie Nelson.

I know you play a variety of instruments including the upright bass, which is what you play with Lindsay Lou & the Flatbellys.  If you went into a room full of instruments, which instrument would you play first?

I suppose I would gravitate towards the piano or the fiddle – those two are the most fun to play alone.

Which instrument in your collection has the most interesting story?

Well, one of my basses (the non folding one) was used in Marty Stuart’s band at one time and used on his album Live at the Ryman.  I bought it from the guy who played it in his band, shortly after I won the band contest at the Telluride Bluegrass Festival in 2010. I also own a fiddle that a friend of mine built from scratch using only hand tools.

It’s fun to watch your #whereisleptlastnight #tourbed photos come through my Facebook feed. Do you remember the first one you took and why? 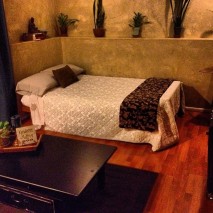 I think the first tourbed picture I took was the purple fiddle in WV but I  couldn’t be positive about that. I got the idea from Ana Egge but she doesn’t tour nearly as much so I figured I’d give it a try.

You’ve played at multiple festivals across the United States. Which one would you say is your favorite and why?

It’s super hard to try to pick a favorite festival out, but getting to experience Telluride as an artist was super cool and fun and Grey Fox Bluegrass Festival throws a great one and they have great artist catering.

Lancaster is an incubator of creativity with great art galleries, music venues and restaurants. Will this be your first visit here? If not, do you remember the where, when and why for your visit?

This will be my first visit to Lancaster and I’m looking forward to it very much.

Touring involves a lot of sedentary travel time. What activities do you do when you have an opportunity to move around?

I try to get outdoors when possible. I like hiking, playing golf, swimming, and occasionally shooting skeet.

Chestnut House Concerts provides dinner for our guest artists. Any special requests for after the show on September 7th?

No special dinner requests. We generally like to eat good, fairly healthy food but we’re not super picky. Can’t wait to play your house concert series!