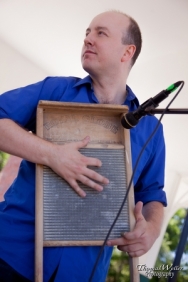 Ryan  McKenna of the Steel City Rovers was kind enough to speak with me about his band from Hamilton, Ontario.

Hamilton, like Pennsylvania’s Steel City, is experiencing urban renewal – from steel to medicine. The Juravinski family is investing dollars in cancer research and with this new energy there are fresh possibilities. Young people are re-purposing city space as active living areas with lots of art and music. Old places are becoming re-energized, helping the community wake up from the stupor of previous generations.

“Broadly speaking, our culture in North America is going through a shift. Things cannot be done the same way anymore” said McKenna. He then related this cultural transition to the Rover’s approach to Celtic music. The band plays only original tunes bringing newness to Celtic roots by looking back to traditional ways of playing the music and giving it a twist. While a song might be brought to the band with the lyrics and melody already together, (Ryan is the lyricist) band members might change a line or add an idea. The Rover’s work well together and when something doesn’t feel right, they maintain the delicate balance between knowing when to seek change and when to step back.

Ryan and guitarist Joel McKenna are siblings and have been making music together all their lives.  About 10 years ago multi-instrumentalist Mark Fletcher came to a pub where Ryan and Joel were performing and he sat in on some songs with them and they’ve played together ever since. Drummer Danno O’Shea played with the Rover’s until he became too busy to make a full time commitment to a band. Danno recommended his protégé Jess Gold; she and fiddle player Dave Neigh round out the five piece band.

The Steel City Rovers continue to gain recognition in the music industry and this year received their second nomination for the ethnic/world category at the Hamilton Music Awards. McKenna notes that the band is receiving acknowledgement for strong vocal harmonies and songwriting but also as an instrumental powerhouse. The Rovers are now playing on stages that they’ve wanted to be on for quite some time.  While the large venues are fun, the small house shows or pubs are what they’re most used to and familiar with.  There’s no division between the performer and the audience.

Two of the most asked questions when hosting house concerts are “what kind of music is it?” and “what should I bring to the potluck?”.  Ryan’s answers are “Celtabilly” and “Guiness always pairs well with music”.