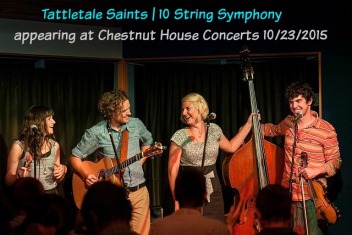 Returning to Chestnut House Concerts on Friday, October 23, 2015 are the 10 String Symphony and Tattletale Saints.

The Nashville-based duo that is 10 String Symphony formed in 2012, when Rachel Baiman and Christian Sedelmyer formed the band out of mutual admiration for each other’s playing. They have two albums, 10 String Symphony and, to be released on October 23, 2015, Weight of the World.

Tattletale Saints is a duo from New Zealand that is now based in Nashville, Tennessee. Cy Winstanley, vocalist, guitarist and songwriter, is joined by vocalist and double bassist Vanessa McGowan. Tattletale Saints recorded their debut album How Red Is the Blood in January 2013 in Nashville with Grammy winning producer and multi instrumentalist Tim O’Brien.

Our house concerts begin with a potluck at 6 pm and the music starts at 7 pm.  A suggested donation of 15/20 per person can be made at the door. If you’d like to attend, email Tim at tlehman9@gmail.com with your name and the number of seats to reserve.