At the April Verch house concert last week, someone asked about the upcoming show on April 7, 2013.  I excitedly told them about the Kruger Brothers and how thrilled we are to host them at our house concert venue.  Then came the logical question from someone who hasn’t heard the band, “What type of music do they play?”  I struggled a bit.  Bluegrass? Folk? Classical? Jazz? 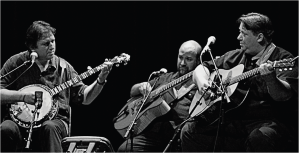 Natives of Switzerland, brothers Jens and Uwe Krüger started performing regularly by the time they were 11 and 12 years old, and began their professional career in 1979.  The music of bluegrass greats Doc Watson, Flatt and Scruggs, and Bill Monroe made it across the ocean and influenced the brothers at a young age.  Jens is known as one of the best five-string banjo players in the business.  Joel Landsberg, a native of New York City joined the brothers in the early 90s and together they established the incomparable sound that the trio is known for today.

I thought perhaps I should freshen up on details from the Krüger Brother’s press kit so that I was better prepared for questions about our next house concert.  The introduction reads:

“Intense and tranquil; classic, classy and classical; jazzy and grassy – all at the same time.”

Check the ‘About’ page on how to reserve a seat for the event.