Rolling Stone Country magazine recently listed Billy Strings in 10 New Country Artists You Need to Know. When Billy was at Chestnut House Concerts, he was working with Don Julin. In early 2016 Billy started working on his own and anticipates the release of his debut album, Turmoil & Tinfoil on September 22, 2017.  Visit Pledge Music to hear a sample of Billy’s cover song and preorder the album.

This four piece band out of Boston was our first band at Chestnut House Concerts in 2017. Their recent video “I Miss Talking”  was recently reviewed by The Journal of Roots Music, No Depression.  The band also releases their self-titled album Signature Sounds Recordings in August 2017. 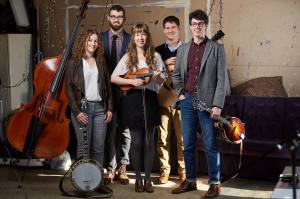 Mile Twelve added a fifth member, David Benedict (mandolin) to their band since they played at Chestnut House Concerts. The band is nominated in 3 categories for this year’s International Bluegrass Music Association Momentum Awards. The band is listed  with four others as momentum band of the year, and Bronwyn and David are both nominated as momentum instrumentalist of the year.  They just finished recording a new album to be released October 27, 2017.  Fall 2017 is shaping up to be an exciting season for this bluegrass band.

Saturday, September 2, 2017 Chestnut House Concerts is excited for the return of Laney Jones.  Potluck at 6 pm, Music at 7 pm. We’re over half way full for the show – if you want to claim one of the vacant seats contact Tim at tlehman9@gmail.com.  Recommended donation of 15/20.

The International Bluegrass Music Association (IBMA)  added the Momentum Awards in 2012. These awards are focused on artists and business people who are in the early years of their careers in bluegrass music.

This year Brad Kolodner was recognized for the 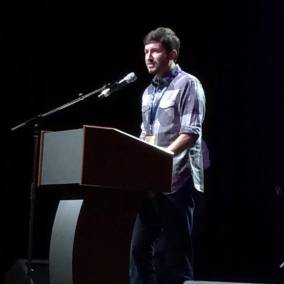 2016 Industry Involvement Award for his bluegrass show at WAMU radio, 88.5. You can read about all the Momentum Award finalists at Bluegrass Today or on the IBMA website.

Brad and his father Ken Kolodner will be performing at Chestnut House Concerts on Saturday, November 5 along with fiddle player Rachel Eddy.

Here are Brad and Ken playing “Reuben’s Train” from their 2013 album “Skipping Rocks“.

Laney Jones has a new band! Bass player Tré Hester and percussionist Brian Dowd join founding member Matthew Tonner (guitarist). If you want to hear Laney Jones and the Spirits they will be in Pennsylvania on September 26, 2015 in Schyulkill Haven. In the meantime we’ll be looking for ways to schedule them at Chestnut House Concerts.

Congratulations to Roochie Toochie and the Ragtime Shepherd Kings as they took home 1st Place for Neo Traditional Band at Clifftop 2015. No one who witnessed their July 28, 2015 performance at Chestnut House Concerts should be surprised with this news.

Soon after their summer 2015 US tour that included a 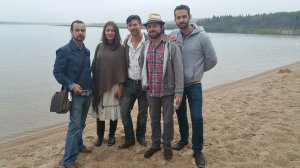 visit to Lancaster, PA, I Draw Slow completed their first tour in Canada. The International Bluegrass Music Association announced two nominations for I Draw Slow – The momentum awards for Band Performance, and Vocalist Performance (Louise). Awards are presented Wednesday, September 30, 2015. You’ve got our vote for both categories – best wishes!

The next show at Chestnut House Concerts is The Blackberry Bushes Stringband from Seattle. This five piece Americana Bluegrass band will be performing at 7:00 pm on Friday, September 25, 2015. There will be a potluck at 6:00 pm and the suggested donation is $15/20 per person.  To reserve seats contact Tim at tlehman9@gmail.com or by phone/text to 717-940-9311.

While traditional bluegrass bands were (some still are) limited to male musicians, female bass players are fairly common in contemporary bluegrass bands; 7 time IBMA bass player of the year award winner Missy Raines is probably the most well known.  In the world of string bands playing the wide assortment of folk/Americana/roots music, you’ll find that females are playing all instruments from the banjo to the upright bass. 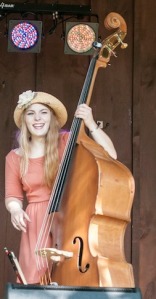 In May, 2013 The Barefoot Movement bassist Hasee Ciaccio demonstrated that height was not necessary to master the skill on the upright bass, and audience members were charmed by her personality, vocal quality and ability to add a complex bass line that enhanced the tunes. 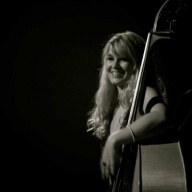 In December we had the honor of having bass player Shelby Means of the all female band Della Mae. Shelby joined Cruz Contreras and Josh Oliver as the Tanasi Ramblers for a few shows over the 2013 holiday season. Her upright bass is named Buddha and the two adeptly moved together throughout the evening’s set list with Shelby demonstrating her finesse as an accomplished musician.

In upcoming shows we are excited to see bass player Vanessa McGowan of Tattletale Saints on April 4,2014 and Telisha Williams at this week’s show.

Don’t miss vocalist and upright bass player Telisha Williams of the Wild Ponies when they perform at Chestnut House Concerts this coming Friday night, January 17.  It’s our usual schedule of potluck at 6:00 p.m. followed by the show at 7:00 p.m.  Call/text 717-940-9311 or email Tim at tlehman9@gmail.com to sign up.

Social media makes it easy to follow the artists that have performed at Chestnut House Concerts and there are some great things happening to these fine musicians.

Several of the performers from last year’s line up attended the annual convention of the International Bluegrass Music Association (IBMA) this past week in Raleigh, NC including The Barefoot Movement, The Stray Birds, and  Lindsay Lou & the Flatbellys.  The Raleigh News & Observer featured The Barefoot Movement in their entertainment section on the write up of the IBMA event.

The Kruger Brothers’ show on April 7, 2013 was a favorite of our regular Chestnut House Concert audience members.  It was no surprise to anyone that Jens won the 2013 Steve Martin Prize for Excellence in Banjo and Bluegrass.  What fun to see them on the David Letterman show Friday night (September 27, 2013).