It’s time for another artist update; bringing you news from artists that have played at Chestnut House Concerts.

Adrien Reju recently signed with Big Hassle Management in Philadelphia and her tour schedule going in to 2014 is full including 4 April shows in Florida opening for Amos Lee.

The Kruger Brothers released Spirit of the Rockies which was recorded at The Banff Centre, in Banff, Alberta Canada.  All 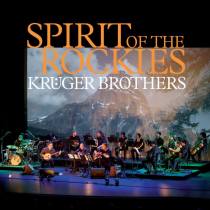 music was written and scored by Jens Kruger and the story line – following a man’s journey of young love through a life time – was written by both Jens and Uwe Kruger.  Jens on banjo, Uwe on guitar, Joel Lansberg on bass, Josh Day on percussion and they are joined by the Banff Centre Chamber Orchestra. 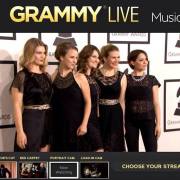 Della Mae at the 2014 Grammys. Shelby Means is on the far left.

Shelby Means played at Chestnut House Concerts on December 27, 2013 with the Tanasi Ramblers.  She is the bass player for Della Mae whose album This World Oft Can Be was nominated for Best Bluegrass Album of the Year in the 2014 Grammys.

Baby girl  Ida Maeve Robertson Lindsay joined The Birds of Chicago family on December 30, 2013.  Here’s a photo of Ida on the way to get her passport for the upcoming February tour in Europe, and one of her just being her cute self. 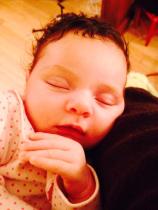 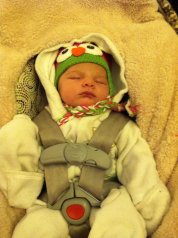 Laney Jones and the Lively Spirits will be at Chestnut House Concerts on Friday, February 21, 2014.  Potluck at 6, show at 7.  We hope you can attend.  Check the About section for more information on how to reserve seats.