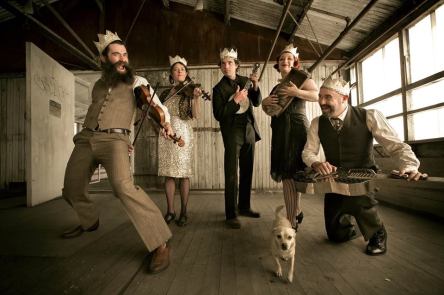 The first phonograph showed up in 1877, yet another invention by Thomas Edison – and even he was fond of this machine that could record and play back sound and would often reply to questions about his best invention, “I like the phonograph best”.

Performers would stand before a funnel-shaped horn attached to a phonograph and belt out their tunes. High volumes of sound were required to make the recording diaphragm vibrate strong enough to force the cutting stylus to carve on the blank wax cylinder. The recording engineer would tell the musicians when to begin and would keep the wax shavings from getting in the way of the stylus during the recording.

Roochie Toochie and the Ragtime Shepherd Kings have recorded songs on “honest to goodness” wax cylinder. The band, made up of Aaron Jonah Lewis, Matt Bell, Timmy Findlen, Lindsay McCaw, and Joy Patterson, reports “our mission is to perform the weirdest songs from the early days of tin pan alley on the format on which they were first recorded – wax cylinder”. The video below shows the band recording “The moon shines on the moonshine”.

Can’t wait to welcome this band to Lancaster, Pa and to host the Roochies on Tuesday, July 28 at 7:00 pm at Chestnut House Concerts.